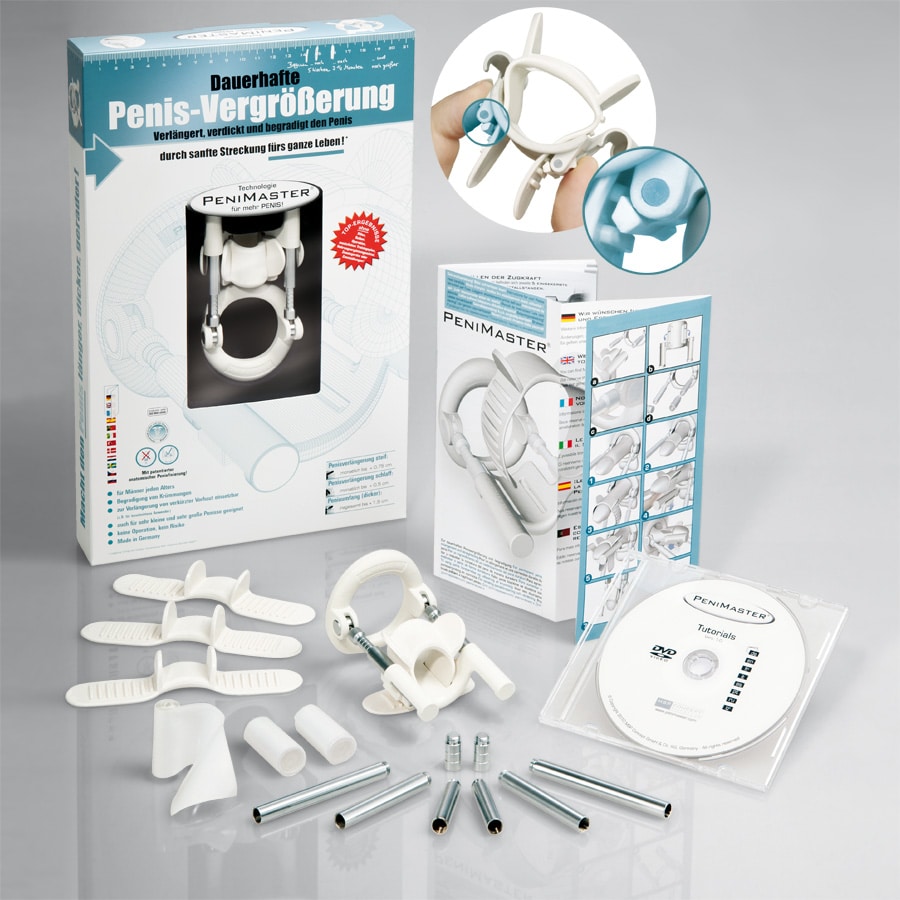 Nothing spells success like a strappy contraption dangling from your dick.

At least that’s what the penis enhancement manufacturers of the world want us all to believe. While the results rendered by most modern-day dick stretchers are a lot better than they used to be, the methods used to achieve those improved results have become more complicated than our last relationships.

Single and independent, we wanted to increase the size of our wang and improve our performance in bed while we hunted down our next fuck buddy. So, we stopped messing around with amateur penis enlargers and began reviewing shit with a little more to bring to the table. Enter: The PeniMaster. We should go ahead and warn you that this thing does not fuck around.

It looks like something out of a science fiction movie to us, but we learned from the Fleshlight Freaks masturbators series that sex with aliens can be fun.

So, despite our initial reservations upon unpackaging the complicated PeniMaster, we decided to give this review a valiant effort because we give a damn. Also, we want irresponsibly enormous dicks and this is obviously the only way we’re gonna get that.

The PeniMaster deserves our attention because, quite frankly, it can do what other penis enlargers on the market can’t do. Hold your horses; we will get to that soon enough. All you need to know for now is that this thing comes highly recommended by us, regardless of how overwhelmed we were in the beginning by the various straps, knobs, and buttons. What can we say? We’ve been turned into lab monkeys.

What Is the PeniMaster Pro?

Not that you would ever get the impression by looking at it that the PeniMaster is your ordinary penis enlarger, but we still thought we should tell you it’s rather a unique tool. 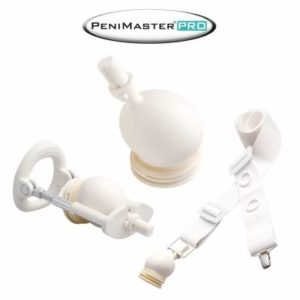 What makes it even more extraordinary is that it is designed to accomplish what other products on the market cannot. The PeniMaster lineup features four different models/attachments as well, just in case your needs are more specific than the basic model can accommodate.

Made to assist men of all sizes, this thing is officially considered a “medical expander” because of its wide range of abilities. It can elongate your dick, make it thicker, straighten it out, and even (gasp) recover your foreskin. We looked everywhere and we couldn’t find anything that could do that. In fact, the PeniMaster series can also serve as a plastic surgery substitute for some men, which we thought was pretty damn cool.

The Main Features Of The PeniMaster Pro

Understanding the main features of this futuristic device is difficult if you can’t understand the fact that it has various add-ons and accessories, each of which is designed to accomplish a different and distinguished goal. Let’s break it down now, shall we:

At first, we weren’t sure what to get or how to use it. 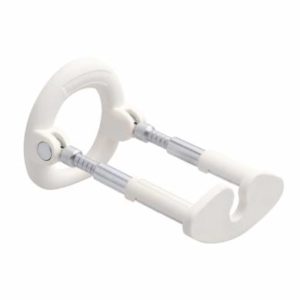 But once we got the hang of things, the PeniMaster all snapped together easily and wasn’t too off-putting to wear under loose-fitting clothes. We will say this, however: the unique lineup we just reviewed helped us achieve the kind of results you only hear about on TV.

Overall, the PeniMaster brand is made from medical grade materials and backed by tons of scientific research. The manufacturer boasts quick results as well, and they’ve certainly got bragging rights. Some of us experienced growth and/or straightening within the first few days, and none of us had any complaints about the increase in sexual arousal either. And as major supporters of cancer research, we appreciated how, according to a recent clinical study, the PeniMaster Pro is often used by men who have had their prostate removed after cancer, which causes penile shrinkage.

What Comes in the Box

What we didn’t appreciate was the lackluster packaging. 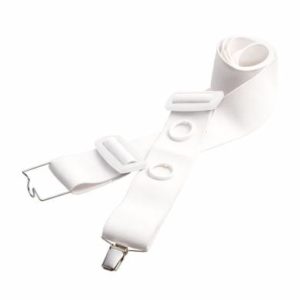 We think that just because you’re selling a medical-grade product doesn’t mean you have to pack it up in a boring, overly commercialized, and very obviously “decorated” box. Had it not been for the shipping company’s commitment to privacy, everyone in the neighborhood would have seen the huge PENIMASTER words emblazoned on the size of the package as it glistened in broad daylight on our porches. This right here is why we always give a P.O. Box number.

Inside were the redeeming qualities of the PeniMaster penis enlargement system. Mind you, a complete set that contains all four of the products in the lineup can be purchased at any time for about $335. Meanwhile, the Original (with its $175 price tag) comes with: 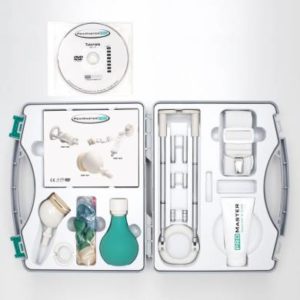 The PeniMaster Chrome is mounted by the way, with what the manufacturer is calling “next generation support” that uses sturdy fasteners and fiberglass enforced materials – not a good idea for people with sensitive skin though. As for the other three products, they come with the following items:

The Pro Belt Expander only comes with the belt, and they all have to be purchased alongside the Original system to function as intended. We don’t suggest rigging this shit to save money any time soon. It’s expensive but it’s durable, and yet it still has a fuck ton of tiny moving parts. Use your carrying case, guys. Yes, each product comes with a 3-year warranty registration card, but that’s no reason to abuse it. Save the rough stuff for the after party.

In terms of penis enlargement and correction tools, the PeniMaster is truly deserving of its commanding name. 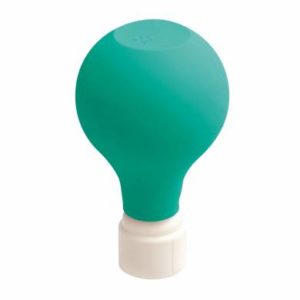 While other dick improvement mechanisms concentrate solely on simplicity and user-friendliness, the makers of PeniMaster keep it real. Making your cock swell and stand at attention requires systematic finesse. These things don’t happen overnight, and PeniMaster doesn’t go handing out guarantees like some of the other folks out there.

Apparently, the manufacturer of this thing also endeavor to weed out the faint of heart. Compared to other products like it, including high-end penis pumps, the PeniMaster leaves no stone unturned and no step allowed to be missed with potentially damaging results. Additionally, many people (including us) really didn’t appreciate the fact that so much of an investment had to be made to use it. We’re ballin’ on a budget over here, do ya mind?

We discovered that the medically-inspired PeniMaster is relatively easy to use; go figure. And since the PeniMaster has numerous “fields of application,” just about every dude on the staff took one home. None of us made eye contact with one another for a month or so. Then slowly, we would begin emerging one-by-one from our perverted cock-oons with “swollen pride.”

We sort of had to eat crow on this one because we talked so much shit before trying it out. Put simply: it works, but you have to know what the fuck you’re doing or else it won’t. That’s pretty much the bottom-line. There’s definitely a learning curve with the PeniMaster series, so bring your smarty pants.

We aren’t known to brag about products, especially since we are here to be as objective as possible, but we can’t help but sing the praises of the PeniMaster lineup. 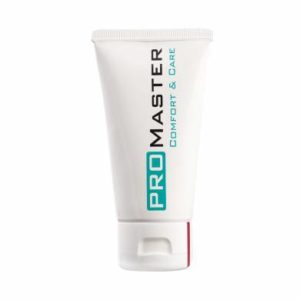 Although it has a number of obvious design flaws, our impressions of it were positive nonetheless. We can’t necessarily compare it to anything, but what we do have in terms of competition seems to fall short of the PeniMaster’s restorative power. Not trendy or attractive in any way, this bad boy is designed for guys who want to take shit to the next level without getting a prescription. On our infamous scale of 1 to 10, this bitch gets a solid 9 and that’s only because we’d like to see what else the manufacturer has up their sleeve.