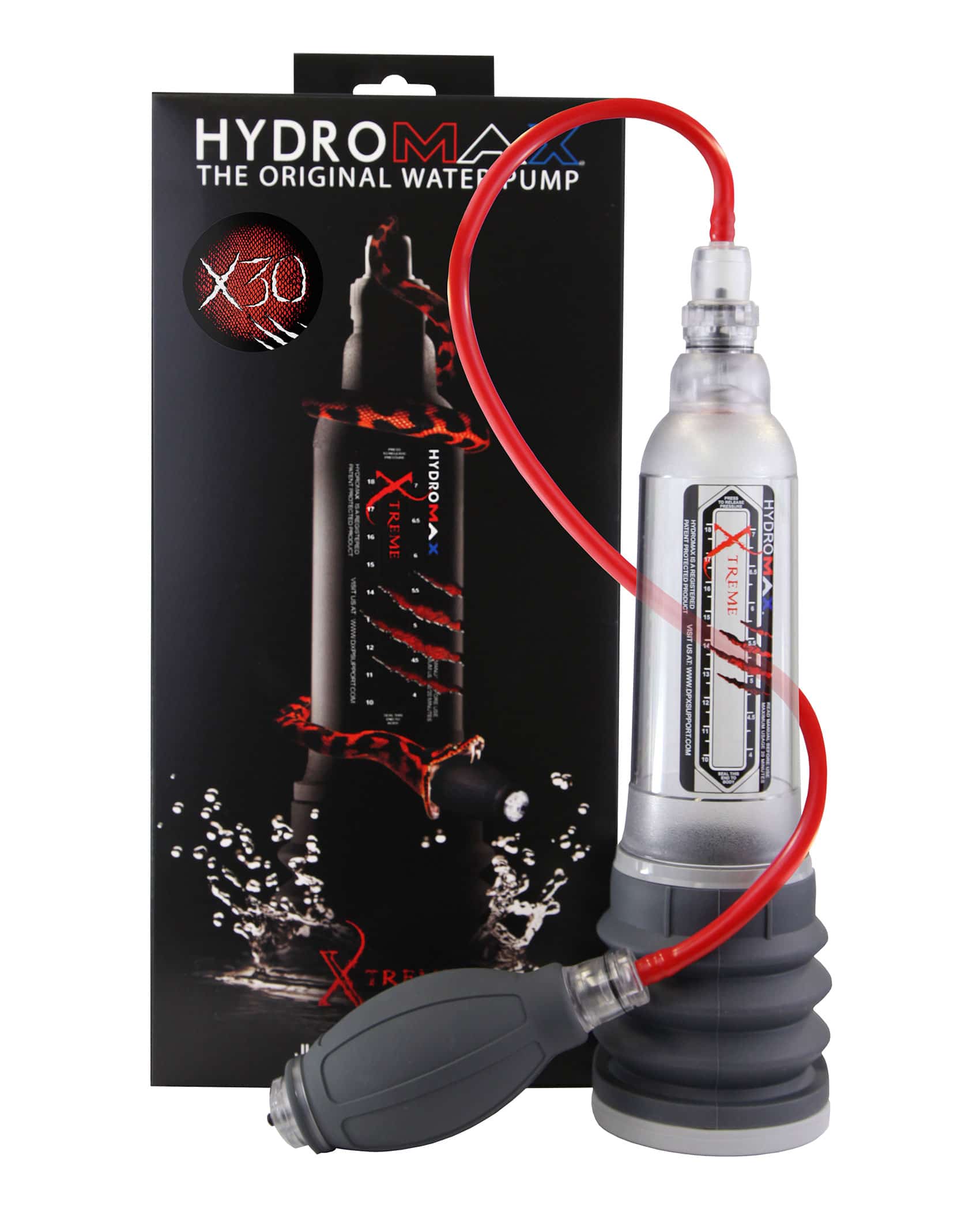 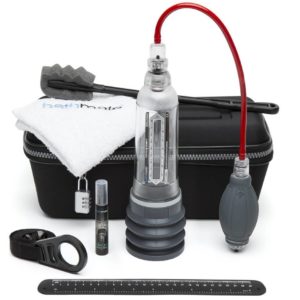 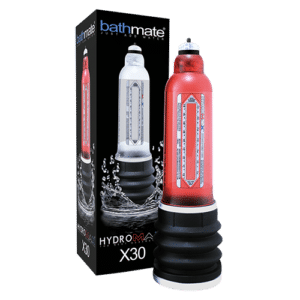 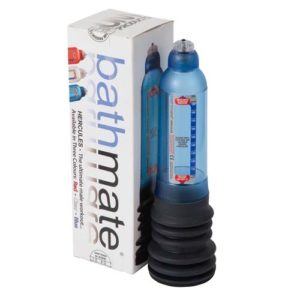 Advanced devices exist for just about every product on the market.

Manufacturers understand that most products have a range of users, from novice to expert. The sexual enhancement industry is no exception, which means there are products out there for the penis pumping pros. One such product, the HydroMax Xtreme Series, caught our attention so hard that we decided to review the entire HydroMax lineup.

Having already tried out the brand’s BathMate original and X-Series collections, we obviously moved on to bigger and better things with the Xtreme. Although a quick dick pick-me-up is easy to find these days, discovering a device that offers permanent results is a diamond in the rough. All three of the HydroMax series promise lifelong enhancements, so we put them all to the test to find out if the manufacturer can actually stand behind their lofty claims.

Turns out, the BathMate nor the X-Series can hold a candle to the penis enlarging power of the Xtreme series which is, albeit, still not as remarkable as the FleshPump or the medical-grade Penomet. But despite its numerous flaws, which we will discuss later, the HydroMax Xtreme Series is a true contender among high-grade cock plumpers, especially considering it was designed using scientifically proven methods and supreme-quality materials. We won’t lie. We are whores for great manufacturing.

What Is the HydroMax Xtreme Penis Pump Series?

If you’re read our reviews on the other HydroMax penis pumps in the new lineup (the BathMate and the X-Series), then you can probably guess what’s coming.

The Xtreme version operates in the exact same way as the others, with the new and improved valve and everything. However, the Xtreme series features a number of add-ons that the others don’t have, not to mention it has four different models (as opposed to the other lineups, which only have two or three).

Basically, the HydroMax Xtreme series is a somewhat luxurious lineup of various sized penis pumps for advanced users. Each comes with extra accessories, and all are available in a variety of attractive colors (as long as “variety” means white). Like the Ford Motor Company of the penis pump world, the HydroMax brand has been making dick enlargers since the beginning of time, having pioneered the very first pump ever to be sold commercially. Such innovation can be seen in the sheer scale and design of the high-end Xtreme series, although the results are still slow to come for some.

Each of the different sizes are designed to accommodate the large penises of men who have done this a time or two. Since the HydroMax brand obviously feels like their products can do a better job than anything else on the market, they not only offer a 60-day money-back guarantee but their Xtreme version is supposed to improve penises that have yet to be perfectly plumped despite otherwise valiant efforts.

In other words, the HydroMax Xtreme Series is made for guys who want a little more, even if their dicks are already large and in charge. Not only that, but this version is designed specifically for dudes who work well under pressure. The amount of suction provided by this thing, even on the lowest setting, is not for the faint of heart. It will either stretch out your dick or it will kill you trying.

The makers of the Xtreme series advertise that their most expensive and highest-quality penis pump will help men “unleash the beast” in their pants. 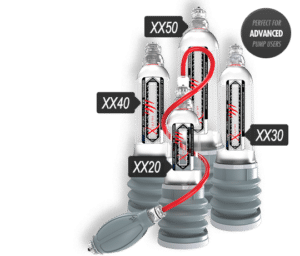 They claim that the funk is in the features, which include things like a measuring gauge and detachable handball with a hose attachment for maximum pumping pleasure. This particular lineup features four different models: the XX20, XX30, XX40, and XX50, each of which is capable of imposing serious amounts of pressure on the shaft. As such, its features make the Xtreme series most suitable for experienced pumpers.

Unlike its brothers, the Xtreme series doesn’t look dorky at all. In fact, the combination of its subdued color, solid manufacturing, and much needed bells and whistles make it look like a high-tech, medical-grade implement. We wouldn’t mind getting caught using one is all we’re saying. We should note, however, that its elegant features also include soft and flexible gators which, like the other models in the lineup, seem rather large for men with short dicks. But what do we know?

Since the Xtreme claims to be the pump for men who know exactly what they want, it didn’t surprise us that the box it came in contained a little more than the other pumps in the HydroMax lineup. It is, after all, the cream of the brand’s crop. 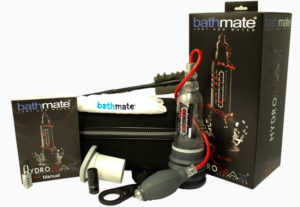 Within the otherwise commercial-looking package we found the following items:

If you ask us, that’s a lot of shit to stuff inside a box containing the one thing that will give you a big dick that sticks around longer than your last girlfriend. And although all this thing will cost you between $250-$350, that’s still less than the cost of a bad date.

The cost isn’t the only thing to consider when comparing the HydroMax Xtreme with the other pumps in the series, not to mention when comparing it to the other pumps on the market. This thing really has no competition, at least not anything in the same league. It is well-designed, well-appointed, and highly effective.

Up against its boisterous brothers, the Xtreme is out of this world. The added handball and hose option is the bee’s knees, and it really adds to the customization of each exercise session. Yes, the Xtreme series still requires the use of the 15-minute workout routine, it’s just that you’ll achieve those coveted results a whole lot quicker with this one. However, when compared to the other pumps on the market right now, the Xtreme isn’t exactly giving manufacturers a run for their money.

It is, for all intents and purposes, a worthy pump for the price. It’s just that something is missing in the equation. Perhaps it’s the not-so ergonomic design of the chamber and gator system, or perhaps it’s the sheer weight of the thing when its filled up with water. Either way, at a certain point, it almost hurt to have it on (even for pros like us).

Speaking of how fucking professional we are: when trying this bad boy out, we actually had to stop in the middle of a workout to readjust it so our dicks didn’t get ripped off. If you don’t get this thing on just right, you WILL be sorry. The pressure measuring gauge is one thing, but the positioning is another. Of course, the same could be said about every penis pump out there. Just be careful, brothers.

Our ungrateful asses can take a tool used to give us monstrous cocks and bust it down like it was a worthless piece of shit. Maybe our mothers didn’t hug us enough, or maybe the following pros and cons helped us formulate our snobbish opinions:

The HydroMax brand might feel like it hit gold on this one, but we are only giving it a 7 out of 10 on our coveted scale. It’s because we hope the brand keeps up the good work and doesn’t stop with the innovations here. Just as science keeps developing, so too should the HydroMax lineup. Perhaps the problem is not in the device itself, but in the manufacturer’s inability to refine an idea before marketing it to desperate-dicked men. But hey, at least the Xtreme series doesn’t look lame as fuck like the other HydroPumps. There’s that.

We encourage the brand’s design team to head back to the drawing board on this one. At first glance, the untrained eye would think the HydroMax Xtreme was the granddaddy of all penis pumps. But upon closer inspection, we saw through the bullshit and changed our minds a little bit. It’s important to read between the lines, boys and girls. Our only suggestion for those of you who insist on using this pro-pump above all others out there, is to go for the Xtreme XX50 instead of any other device in any of the series. It really is the only chance you’ll have to truly get your time and money’s worth.

Indeed, there is plenty of work to do yet on the HydroMax lineup, but the Xtreme series is at least getting closer to the goal. Let’s hope the designers heed our recommendation this time. It would be a damn shame for a decent penis pump to go to waste because the manufacturer was too proud to admit that “almost doesn’t count.”