I knew my roommate would probably hear what I was doing in there, but I didn’t expect to have a conversation at dinner about it. We shared an awkward exchange about my love life while eating spaghetti and watching Cops – where suspects are presumed innocent until they’re found guilty in a court of law.

I, on the other hand, was immediately found guilty of jerking off too much in my room.

The culprit was the ArcWave Ion Pleasure Air Smart Silence Male Masturbator. My roommate probably beats his meat just as much as I do, but while he’s in there sweating to the oldies I’m using the new stuff. And while his girlfriend is still wondering why he can’t find her g-spot, I’m on my bed figuring out why it’s so important.

Who would have known that this toy would breed so much jealousy and provide such a unique education?

This little number is a new handheld penis stroker that features advanced pleasure technologies and anatomically correct ergonomics for supreme sensations. It boasts a special setting that promises absolute discretion, and it offers a variety of distinct intensity levels for optimized on-point orgasms.

Best of all, it’s packaged inside a sleek, portable, and convenient case.

The ArcWave Ion is lightweight and compact but still surprisingly powerful. Inspired by the original penis stroker but enhanced with updated user-friendly elements, this sex toy for men meets or exceeds the standard for self-contained, self-separating, self-pleasure.

Plus, it focuses primarily on the frenulum for deeper, more satisfying climaxes and better climax control.

As a sex toy designed exclusively for men, it’s ideal in several situations: solo stimulation, couple’s foreplay, stamina training, and even travel. It’s crafted for accessibility as well, with a stretchy exterior that’s appropriate for men who have mild to moderate erectile dysfunction.

You can turn it, twist it, squeeze it, and pump it while playing with the settings and enjoying a rapid cleanup afterward. Not bad.

High-tech sex toys for men and women are almost everywhere these days, with features ranging from motion sensors and music syncing motors to app-controlled interfaces and virtual reality connectivity. And while the ArcWave Ion isn’t exactly a futuristic device, it’s far more robotic than the best-selling Fleshlight and can be used either manually or on automatic mode depending on your preference.

It’s basically a black tube into which you cram your ham, but it’s shaped and sized to fit in the palm of your hand. Tapered and tastefully textured, the insertable canal is packed with realistic ridges and a frenulum-targeting action pad that sends waves of pleasure from one end of your junk to the other. 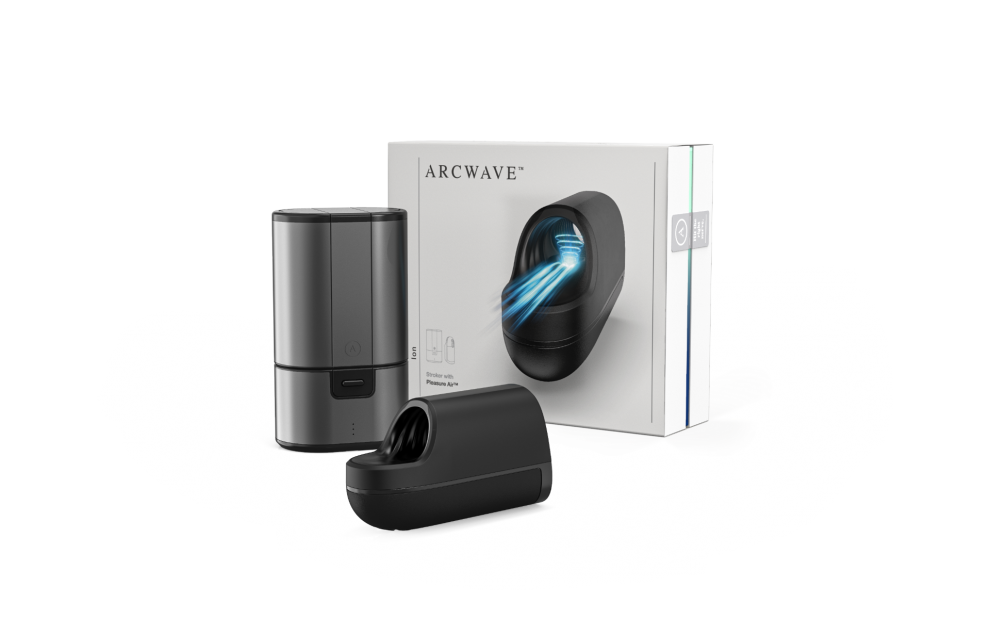 As expected, the most marketed feature on this toy is the Pleasure Air™ Technology. Instead of using traditional vibrations or suction, it sends concentrated pulses of air to specific parts of the penis.

Scientific and sexy, this streamlined shaft smasher also has Smart Silence™ Technology, which is supposed to make it as quiet as a church mouse and shut off when it’s not touching your skin.

The sextech doesn’t stop there, though. Exhibit A) the CleanTech™ silicone, which is designed to help users get dirty without being funky, and Exhibit B) the DryTech™ stick, which makes it easy to finish quickly in more ways than one.

This men’s sex toy is sleek, sophisticated, and supposed to deliver reliable, routine rendezvous after only a quick charge.

Meanwhile, it boasts eight different pleasure settings and each one was designed to pinpoint parts of the penis that other sex toys can’t. There are few customization options and no compatibility with other devices, but the ArcWave Ion seems to be self-sufficient and submissive to its primary purpose.

Its unique features – like the LED storage and charging case – prove convenience as the key element here.

What I Liked About Arcwave Ion

The first thing I noticed was the smooth, modern exterior and the surprisingly compact design. If looks could kill, this toy would be on trial. But since I stopped having sex based on appearances back in college, the pleasure settings and performance features had to be up to par as well.

So, when I experienced the Pleasure Air function for the first time, I was almost died.

If you’re wondering what “pussy power” is all about, you’re gonna learn today.

Here are a few of my (other) favorite things about this miracle machine that gives men insane orgasms:

#1. It targets the tip of my dick, but it doesn’t miss the shaft.

#2. The built-in buttons are cleverly placed for easier control.

#4. The intense pleasure settings make it ideal for edging.

As someone who plays with sex toys a lot, I also appreciated the two-piece, easy-clean design. And with my urge to rotate my hand while jerking off, the oblong shape was nice too.

Plus, you can’t beat a squeezable pleasure air sock that’s USB rechargeable and contained within its own carrying case. Or can you?

What I Disliked About Arcwave Ion

Yours truly has been around the block a few times, so I know that all pleasure devices have their flaws. I also know that nothing is ever as silent as the manufacturer says it is.

Having said that, I was a little disappointed in the decibels put out by this device. I was hoping it was quiet because of my living situation, but it’s more like one of those toys you only use when the house is empty.

Aside from that, I could find a few qualms with the charging setup but that’s about it. The portable dock is pretty cool, but the efficiency thereof had me frustrated.

It takes an inconveniently long time to recharge this thing and then it dies out faster than expected. And with all the edging I’ve been doing, I usually can’t afford a pair of blue balls for breakfast.

It’s also fully manual, although it has features that provide a somewhat hands-off experience. It can’t be synced with other devices, it doesn’t fit into a harness, and it won’t hook up to VR.

Thus, the Ion may or may not be ideal for people with mobility limitations, and it’s generally best when used as a foreplay toy instead of a primary source of pleasure.

NOTE: Since it only has an insertable length of 3.5 inches, this otherwise mighty male stroker may not be appropriate for all penis sizes either.

They say first impressions last a lifetime, so I know I won’t forget about this device for a while. After all, it showed me something completely new about my body, providing a never-before-experienced sensation that must have been closer than I realized to a clitoral climax.

The ArcWave Ion Pleasure Air Smart Silence Stroker looks good too, but does it look good naked? Here’s a snapshot of what comes in the box for your consideration:

Unlike some sex toys for men, you don’t receive any lube samples or device cleaner with the device.

How I Made It Feel Better

Much to my chagrin, there wasn’t much I could do to make this device feel better than it already did. I was hoping to get kinky and creative with my partner. But what happened instead was that I ended up fucking myself into another dimension.

Here’s what I learned about using the ArcWave Ion Pleasure Air Stoker after I got back to the future:

With this device, it’s all about efficiency and free flowing air pressure. That’s why dust and environmental debris are so detrimental to its functionality. So, maintain a strong wind in the canal by keeping the interior and exterior clean.

In other words, wash it and dry it before and after each use.

TIP: Use a non-abrasive, hypoallergenic sex toy cleaner for the best results.

#2. Use an enhanced lubricant.

Lubes with heating, cooling, or tingling ingredients make surface pleasure more fun and spontaneous. Slap something special on your lap prior to the poke and it’s curtains on your endurance.

This is an especially handy trick when using devices that aren’t temperature responsive.

TIP: Try dunking your ArcWave Ion in hot water for a quick blast of realistic warmth.

Since the Arc only offers 65 minutes to playtime before it needs charged again, it makes sense to keep it close to the charging dock. And since the targeted air currents are so strong, you should near climax long before that.

So, juice up the battery between sessions to keep your device ready.

TIP: Check your outlet to ensure a strong electrical current for maximum power.

That SS technology is nice and all, but it’s not always needed. At certain points, it can even get a little annoying. The feature functions a lot like an automatic on/off switch, yet the sensors can be slightly touchy.

So, I turn off the setting every now and then and just let my roommates talk shit.

TIP: Let the TV or radio play in the background to drown out the sound of this boisterous toy.

Because the ArcWave Ion pinpoints the frenulum, I think it’s a genius idea to pair it with a tight cock ring or ball loop (maybe even one that vibrates). Both of those accessories enhance penile sensitivity and send blood flow to all the right places.

So, stay calm and create a combo.

For an even more intense experience, hand the device over to your partner after blindfolding yourself. Then, sit back as they tease and please your body in ways you could never imagine.

Sweeten the pot with some oral sex and you’ll emerge a different man. Trust me.

Don’t get me wrong; you can’t still use for stroking the penis. It’s just that maybe we’d all have a better time if we let the machine do all the work.

FUN FACT: I like to prop mine in between a couple of pillows and then thrust my way into nirvana.

As such a simple and elegant sex toy, the ArcWave Ion Pleasure Air Smart Silence Male Masturbator blows most of the competition out of the water – and I mean that literally.

It’s not only equipped with state-of-the-art pleasure air technology instead of old-fashioned vibrations, but it also delivers a sensation that’s as close to a female orgasm as any male can get.

And thanks to the compact design, the toy goes anywhere without causing a stir. So, while it may be somewhat loud like a good lover should be, it’s also sheathed inside a sleek, masculine-looking case that pulls triple duty.

This fast and efficient device is easy to use, effortless to clean, and impossible not to love if you have a penis. Even the drawbacks are manageable, which means I probably won’t be putting mine back into storage until it’s time to charge it again – nosey roommates be damned.